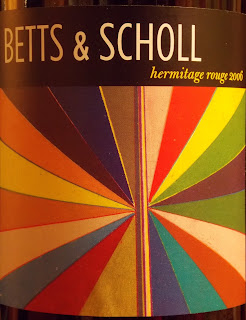 As time winds down to Saturday’s trans Pacific flight I thought I might post on a few wines. A few practice swigs, if you like. The wine for this post was recommended as a excellent Northern Rhone with a “weird” label and a 50% discount in recommended retail price. Half price? No weird label was going to put me off giving it a try. The label is the work of Los Angeles artist Mark Grotjahn and is supposed to represent a star burst “to help make the wines the stars that they are”. Which explains the post’s title (apologies to Van Gogh).

The wine is from Betts and Scholl, a winery founded by master sommelier Richard Betts and art collector Dennis Scholl. Wine and art, exactly what the bottle represents. Betts and Scholl was sold to spirits company Castle Brands in 2009. As far as I am aware Betts and Scholl do not own any vineyards but rather work with owners and wine makers in Australia, California and France to produce a variety of wines. The Northern Rhone is a collaboration with Jean-Louis Chave and is simply called Hermitage Rouge. Wines from the Hermitage AOC are often pure Syrah but can contain up to 15% of Marsanne and/or Roussanne. 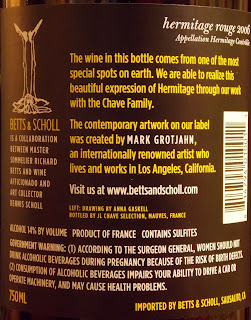 The wine recommended to me was from the 2006 vintage. In color it’s a deep, dark cherry red with a red edge rimmed with a tinge of orange/brown. It is developing very well with a bouquet that speaks of damp earth, spice, barnyard, the ink well from an old school desk, leather, black pepper and crushed violets. There is also a dusty oak note and the aroma of tobacco as you swirl the wine in the glass. The body is medium weight and supported by juicy acidity and very firm tannins. The flavors carry well across the palate to a lengthy finish. It lacks depth on the mid palate but should fill out with a few more years. At present it’s a wine that needs food to soften its astringency. Easy to pick as a French Syrah but perhaps not as Syrah only. Is it just Syrah? Hmmmm, hard to say but its certainly great value at the price I paid.

They not only make damn good wine in Paso, they also know how to get you excited about it. Check out the latest video from the Paso Wine Man. What a beast!

Plus here's a look at what varietal will be featured each month of 2013. Next month should be interesting especially as the Syrahs from Paso cannot be called look alikes. 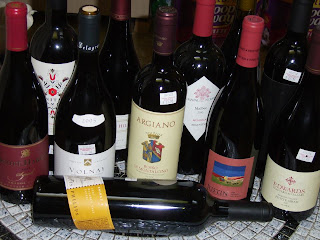 Given the lack of activity in this blog one might think little to no wine passed my lips in the past twelve months. That would be wrong. 2012 was a busy year. Lots of wine was consumed and notes taken but the real highlights were the trips afield. In February there was a cruise on Holland America down into Mexico. I have grown to like cruises. What I don’t like are the wine prices onboard. I try to embark with as much wine as I think is needed even if it means enlisting fellow travelers as mules. This is not necessary with Holland America as they allow a generous personal wine allotment. I also like to do cruises with my mother-in-law. She needs to be taken onboard in a wheelchair which means that I get her walker. So if you are ever going on a cruise and you see a little old lady being wheeled up the gangplank followed by a guy pushing a walker loaded down with at least one case of wine, you will have found me! Say Hi. I might share a bottle with you.

May found me in Granada, Spain on a work related trip. Andalusia, specifically in the southwest, is sherry country. Through the good graces of Classical Wines I was able to organize a tasting for our little group at Bodegas Hidalgo La Gitana. In what was to be a recurring theme for 2012 I had come down with a head cold which meant my appreciation of the wines was limited but I must applaud the generosity of Senor Hidalgo (6th generation winemaker) for making time to give us a guided tour and unbelievable barrel tasting of his outstanding sherries. Also of note during our trip was the availability of inexpensive aged wines in several restaurants. Spain definitely stays on the wine Bucket List for the future. 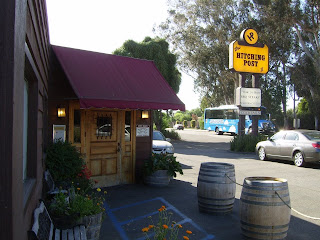 To celebrate my 60th birthday in June we took a short trip to Santa Barbara which turned out to be partly a reliving of Sideways the movie, and partly new discoveries. We took the train, conveniently bypassing the LA freeways, to Santa Barbara with the soundtrack of Sideways playing in our heads. With a hire car we based ourselves in the unique little village of Solvang and enjoyed dining à la Miles and Jack at the Hitching Post II and the Los Olivos Café; and yes, Miranda did have a glass of F^#k!&g Merlot. We also had dinner at the Ballard Inn in Santa Ynez and tasted at many excellent wineries that didn’t get the nod from Sideways. But the real discovery was the Wine Ghetto in Lompoc. A bunch of wineries in a Lompoc industrial park with the finest being Piedrasassi; they even had a friendly Standard Poodle!

In October we did a road trip to UC Davis, where Miranda’s highlight was to celebrate her 30 year class Reunion. For me a highlight of the Davis trip was, you guessed it, wine. The Dean’s Office at UC Davis arranged for us to take a personal tour of the new Robert Mondavi Wine and Culinary Institute and Good Life Garden. Continuing the benefits of being married to a good woman we then stayed with a long time veterinary friend of Miranda’s and her winemaker husband in Sonoma, and then on to Mt Veeder overlooking the Napa Valley with Miranda’s cherished old friends Ridgie and Buttons. We visited wineries in Napa, Sonoma and the Anderson Valley and yes, for several days I had a head cold and could smell absolutely nothing. But when my nose began to work I really appreciated the discount that winemakers offer each other and we filled Miranda’s little Subaru with three cases of wine! Most memorable were sampling wine at various stages of fermentation at Russian Hill Estate Winery, and a visit to Lagier Meredith, the smallest mountain vineyard in Napa which is only reached by traversing an (almost) death defying switchback one lane road. Outstanding wines, especially their Syrah. Worth every stomach clenching curve. Carole Meredith told us a little trivia about Precious Bane, their recently released excellent Syrah fortified. Its named after a novel written by Mary Webb, the great aunt of Carole Meredith. A character in the book is named Jancis Beguildy. And the parents of a very well know wine writer/critic named their child after her - Jancis Robinson!

On the way back down to San Diego we also dropped in to a few, but nowhere enough, wineries in Paso Robles. This is one region I need to revisit for several days. There are great examples of Syrah in Paso, like the 2005 McPrice Myers Les Galets Vineyard Syrah that I am sipping as I type. Richly complex and still a pup at 7. Who said 15%+ wines have no aging potential.

What does 2013 hold for Shiraz? Stay tuned because February will find us in Australia on a wine tour of Victoria, specifically Rutherglen, and the Barossa and Clare Valley regions of South Australia. Then in April we will again visit Davis and hopefully there will be time to visit a few wineries in Napa, Sonoma and Anderson Valley. Who knows maybe I’ll blog a little about these wine adventures.
Posted by Michael Pollard at 6:24 PM No comments:

Here is an interesting talk by Professor Andrew Waterhouse of UC Davis on Effect of Wine Oxidation on Flavor Evolution - A Review. It includes some useful comments on what might happen during decanting.
Posted by Michael Pollard at 5:47 PM No comments:

Quick spin, the cork popping free, and I fill his glass and mine to the brim.
“In other words it’s the sort of wine given to you in times stress or under duress by a bearded Celtic satyr! Ready?
“Ready.”
“First swirl it around to bring up the bouquet, plunge in your nose to breathe the aroma, then a brief sip before swilling it down”.
“…Wow!”
“Jesus!” still smiling and licking my lips. “This stuff is nectar!”
“Didn’t I tell you, Hagar? Here,” Boyne draining his glass in a glup, “Ah, that’s the taste, frisky, coltish – just a hint of nymphomania - O great gulping wine!”

Posted by Michael Pollard at 9:59 AM No comments:

Email ThisBlogThis!Share to TwitterShare to FacebookShare to Pinterest
Labels: Quotes

Some people would say that I like to drink wine, and a lot more would say that I like to drink too much wine. Maybe so. But last year with a swollen Achilles tendon and blood work suggesting the possibility of future heart disease I decided to cut back on wine and get some exercise. The exercise consists of a 30-40 minute walk mid-afternoon. It’s a poor substitute for the physiotherapy that I was getting for the swollen tendon. At my age there is much to be said for having a twenty-something massage your foot. And, accidently I'm sure, have it brush against her ample cleavage. The skin tight clothes were also appreciated.

But back to the walking. Earlier in the year I had also decided that I should cut back on coffee. Six to eight cups a day were just not helping my bladder. But I soon realized. As I was limping through a nearby car park and around buildings housing various biotech companies. I was passing two coffee carts. And more were likely inside buildings. Maybe one cup of coffee in the afternoon wouldn't hurt? It was a tough decision. My new health kick included bringing a healthy lunch to work. Dollars were being saved that would now go to a drink I had decided to forego. I know that some things are addictive. And my family has the addictive gene, maybe more than one, maybe all of ‘em. Alcohol can sometimes be a problem for me. Although I’m sure it will be the after effects that will be my final undoing. But a large latte mid-afternoon. While I’m out getting exercise. And cogitating about work. What could be the harm?

Today I spent a pleasurable hour. Tasting American Pinot Noir. And a few others. Some Italians. One, an interesting Dolcetto. A Turley Zinfandel. Wine was still in the glasses. As I paid to leave. To buy food from a local Vons. And nearby? A Starbucks. Mid-afternoon. The body craves caffeine. Its had alcohol. But its caffeine it wants. Maybe I should blog about coffee? Maybe I should get my addictions back under control.
Posted by Michael Pollard at 3:14 PM 1 comment:

…sealed off safely in their temperate darkness

“A drink, Miss Martin.”
“I don’t know.”
“Have one.”
“I really shouldn’t.”
“Bust out.”
Gee.”
“Full bodied sherry. A round maderia. Iced muscatel.”
Smith at the bottles. The long necks, the little, the fat. Green, brown, two red and twenty deep dark green. All gently cared for through the cold winter, sealed off safely in their temperate darkness.