The nightstand beside my bed has a dozen or so unread or partially read books on wine. It’s a nightly reminder that I need to find the time to read more and also blog about what I read. So…… 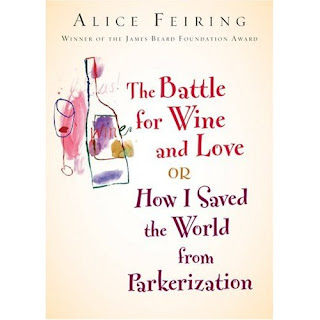 The books include Alice Feiring’s “The Battle for Wine and Love: or How I Saved the World from Parkerization” (Harcourt Inc., 2008) which I have been reading on and off (mostly off) for at least 18 months, although it seems like forever and I’m only at page 113 out of 262. Apart from being the most uninspiring book I have ever read, I cannot fathom the role of love in this attempt at autobiography. How can someone be so negative about wine and life? Maybe the ending is uplifting but I’m not sure I have the patience (or the life span!) to keep reading till then.

In contrast Benjamin Wallace’s “The Billionaire's Vinegar: The Mystery of the World's Most Expensive Bottle of Wine”(Crown

Publishers, New York. 2008) is an outstanding work. Focusing on the infamous Hardy Rodenstock (aka Meinhard Goerke ) and his supposed discovery of bottles of Bordeaux wine bearing the inscription “Th.J.”, the initials of Thomas Jefferson; third President of the United States and arguably America’s first wine connoisseur. Wallace’s writing style highlights the intrigue that this story has engendered in wine collectors and those who like a good detective story. Even so, the final chapters of this saga have yet to be written from the lawsuits that billionaire Bill Koch has brought against those who sold him fake bottles of wine (see Dec. 15, 2009 issue of “Wine Spectator”). Perhaps the most famous example of “caveat emptor” (let the buyer beware), “The Billionaire’s Vinegar” might also be considered an example of “a fool and his money are soon parted”. And it seems there were (are still) lots of wine collectors who have spent extraordinary amounts of money to secure what must have appeared at the time to be true rarities in the world of wine and in the case of the “Th.J.” engraved bottles, American history. Unfortunately many such bottles have identified as fakes or have questionable provenance. But the real fools have to be Hardy Rodenstock (aka Meinhard Goerke ) and auctioneer Michael Broadbent of Christie’s. It pains me to paint Broadbent in this way as I have held him high regard for decades but his failures only exacerbated Rodenstock’s bravado; note: I do not believe that Broadbent colluded with Rodenstock only that he could have investigated the “Th.J.” bottles more thoroughly. Its possible that Rodenstock might have fooled everyone if those bottles had not been labeled so. But by highlighting the possibility that Jefferson owned them he picked on the wrong individual because it is well know that Jefferson recorded almost every moment of his life and especially his daily expenses. Thus it would have taken little effort for Broadbent (or Rodenstock!) to enquire as to the authenticity of these bottles from the researchers at Monticello (Jefferson’s estate located in Charlottesville, Virginia). As it was, a report (dated December 12, 1985) on that possibility was completed by Lucia Goodwin Stanton (then director of research at Monticello) only a week after the auction of the first of the “Th.J.” bottles on Dec. 5, 1985.

Stanton’s report examining whether a bottle of Chateau Lafite 1787 bearing the initials “Th.J” was the property of Thomas Jefferson has been produced without change as Appendix A (page 313) in James Gabler’s “An Evening with Benjamin Franklin and Thomas Jefferson: Dinner, Wine, and Conversation

" (Bacchus Press, Palm Beach, Florida. 2006). Gabler himself discusses the “Th.J.” bottles with Jefferson himself (pages 125-131) in this imaginary dinner with Jefferson and Franklin using much of the information that Stanton obtained from Jefferson’s own recording of his life. The wealth of information available makes in highly unlikely that Jefferson ever purchased 1787 Lafite, let alone had the bottles engraved.

earliest aficionados of wine viewed wine and the world during their time. Admittedly the conversations recorded in the book are mostly from Gabler’s imagination but they are based on historical fact. The book can be hard going because it is one continuous discourse that lacks the relief that chapters would bring. In contrast his earlier book “Passions : The Wines and Travels of Thomas Jefferson

” (Bacchus Press, Baltimore, Maryland. 1995) is an entertaining and enlightening account of Jefferson’s travels through Europe and especially France’s wine regions of Burgundy, Rhone Valley, Bordeaux and Champagne, among others. Also included in the book is a wonderful wine Glossary together with pronunciations (page 303). This is a book that I highly recommend if you want to glimpse one wine life during that period.
Posted by Michael Pollard at 7:05 PM No comments:

A Loaf of Bread, a Bottle of Wine……and a Clean Glass, please! 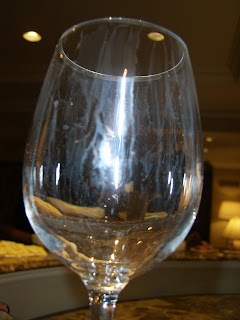 What are your expectations when it comes to the cleanliness of wine glasses? Me, I like mine clean. I like to be able to see the wine rather than water spots and streaks. Every time I set out glasses for guests I check to see if they are clean and if they aren’t I clean them, individually. I want my guests to be able to appreciate the wine they are served not complain about dirty glassware. This does not seem to be the case at The Venetian in Las Vegas. We were there last week to celebrate the 65th birthday of a friend. We did the usual things, played the one arm bandits, took in a show and had a birthday dinner at the Bouchon. It was all great fun with lots of love and celebrations for the birthday boy.
On each of the two nights there were pre-festivity drinks and as Miranda and I had a hospitality suite we hosted the drinks before dinner at the Bouchon. All The Venetian had to do for us was provide about 20 wine glasses. We called to let them know this before we had lunch. We called again after we came back from lunch. And then we called again later as it began to approach the time for our guests to arrive. The excuse was that because we were not in the room the glasses could not be delivered; but that did not seem to stop the maid cleaning the room earlier in the day. Because we had to find an ice-machine to get enough ice keep the white wines cold, Miranda’s mother stayed in the room so that someone would be there to take possession of the glasses. Even getting ice was not all that simple as the ice-machine on our floor was broken. But when we returned the glasses were there, all 20 and all filthy with water streaks. 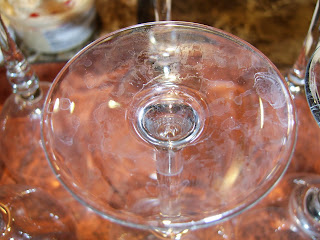 What to do? It was too late to get the hotel staff to clean them. It had taken them hours just to get this mess to our room, so I cleaned them. It was a rush job but I got it done. And even then The Venetian charged us $24 for the privilege of drinking from their glasses.

The moral of this story? Never ask for glasses from room service. Instead seek out whoever is doing the housekeeping of your room and ask them if they can give you glasses from their supply. This is what other members of our group did for the gathering the night before. They got 18 clean glasses and no problems.
Posted by Michael Pollard at 6:29 PM 1 comment:

A Little Bottle of Beer

As I noted in a previous post I much prefer wine to beer, but 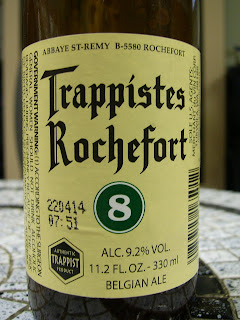 a chance encounter last year has reinvigorated my interest in suds. And it was another chance discovery that uncovered a particularly nice Belgian beer made in the Trappist brewery of Abbey of St-Remy, in the southern part of Belgium. Miranda and I were returning a rented trailer we’d used to dump tree trimmings from the garden when we noticed Mesa Liquor and Wine Co advertising that they had Belgium beers. We must have driven by this place dozens of times and never noticed it. They have over 1,000 beers and so I was hopeful that I would find some vintage beer but the best they could do was some hard to get beers matured in old whiskey oak barrels. They also had the Trappistes Rochefort beers and I got a bottle of the "8" or Green Cap. The “8” pours deep brown in color with a generous head that fades fairly quickly. It’s a full-bodied, deeply flavored ale that really fills the mouth with creamy-smooth richness and an extraordinarily long finish. If it wasn’t for that fact that its over 9% ABV I could drink this little drop all day. Online tasting notes don’t really do the beer justice but it would be interesting to put a case down to see how it changes with age – if I could just figure out where the production date is on the bottle!
Posted by Michael Pollard at 4:41 PM No comments: